I want to be told what to read, watch and listen to 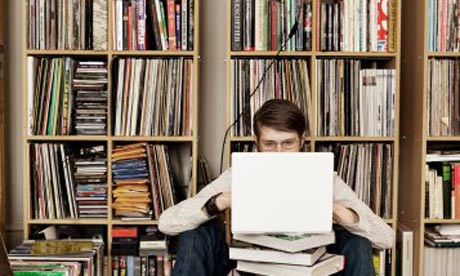 I’m fairly certain I recently passed a rather pathetic tipping point, and now own more unread books and unwatched DVDs than my remaining lifespan will be able to sustain. I can’t possibly read all these pages, watch all these movies, before the grim reaper comes knocking. The bastard things are going to outlive me. It’s not fair. They can’t even breathe.

The other day I bought a DVD boxset of Carl Sagan’s astronomy epic Cosmos: by all accounts, one of the best documentary series ever made. On my way home, I made the mistake of carefully reading the back of the box, where I discovered it has a running time of 780 minutes. Thirteen hours. It’s against my religion to only watch part of it – it’s all or nothing. But 13 hours? That’s almost a marriage. The sheer weight of commitment is daunting. So it sits on the shelf, beside similarly unwrapped and unwatched obelisks. I’m not buying these things for myself any more. I’m hoarding them for future generations.

DVD and book purchases fall into two main categories: the ones you buy because you really want to watch them, and the ones you buy because you vaguely think you should. Two years ago I bought Dostoevsky’s Crime and Punishment, partly because I’d heard it was a good book and an easy read, but mainly because I figured reading it would make me cleverer – or at the very least, make me seem a bit cleverer to anyone sitting opposite me on the tube. I never read it. A few months ago, having forgotten I already owned a copy, I bought it again. This means I haven’t read it twice.

And I haven’t read it (twice) because it’s got too much competition from all the other books I’ve bought but never read. Popular science books. Biographies. Classic works of fiction. Cult sci-fi and horror stories. Reference works. How-to guides. Graphic novels. I can’t buy one book at a time: I have to buy at least four. Which makes it exponentially trickier to single out one to actually read. When I buy books, all I’m really doing is buying wall insulation, like a blackbird gathering twigs to make a nest.

Ditto DVDs. Scenes From a Marriage and The Seventh Seal – two well-regarded Ingmar Bergman films I bought during a short-lived fit of self-improvement. I should have thrown them in a bin on my way home from the shop. It’s hard enough to choose between the two: am I in the mood for a lyrical 92-minute meditation on death, or an unflinching three-hour portrayal of a dysfunctional relationship? Neither, as it turns out. They’d only be interrupted by emails and texts anyway. Perhaps something more lightweight? They’re sitting on the shelf in-between JCVD (a post-modern Jean-Claude Van Damme film) and season two of Entourage. I’ve never seen those either – partly because I feel guilty about not having watched the Bergman films first. Somehow I’ve purchased my way into a no-win situation.

Clearly, some sort of cull is in order. It’s me or them. I pick them. My options need limiting. Last week I watched the first part of Electric Dreams, the 1900 House-style TV show where a family lives with old technology for several weeks. For episode one, they were stranded in the 1970s, with no internet, no DVDs or videos, and only three channels on the TV. It’s fair to say the kids weren’t massively impressed. It was all a bit Guantánamo for their liking. But to me the limited options looked blissful. You couldn’t lose yourself online, so if you didn’t want to watch Summertime Special or World in Action, you had to read a book, go for a walk, or in extreme circumstances, strike up a conversation with a fellow human being.

But it wasn’t just the limitations of the media themselves that appealed. This was 30 years ago. Fewer things had been created for them. Every day we humans gleefully churn out yet more books and films and TV shows and videogames and websites and magazine articles and blog posts and emails and text messages, all of it hanging around, competing for attention. Without leaving my seat I can access virtually any piece of music ever recorded, download any film ever made, order any book ever written. And the end result is that I hardly experience any of it. It’s too much. I’ve had it with choice. It makes my head spin.

Here’s what I want: I want to be told what to read, watch and listen to. I want my hands tied. I want a cultural diet. I want a government employee to turn up on my doorstep once a month, carrying a single book for me to read. I want all my TV channels removed and replaced by a single electro-pipe delivering one programme or movie a day. If I don’t watch it, it gets replaced by the following day’s selection. I want all my MP3s deleted and replaced with one unskippable radio station playing one song after the other. And every time I think about complaining, I want a minotaur to punch me in the kidneys and remind me how it was before.

In short: I’ve tried more. It’s awful. I want less, and I want it now.